The heat of the fire and a cold starry night makes for a romantic and fun ambiance. Campfires are a beautiful escape from the stress of the modern world, which is pretty much what they say about drinking.

Games are also treated as an escape, a way to bask in euphoria with healthy competition and laughter.

Now, imagine combining all three into a pleasurable experience. It sounds like a recipe for one “legendary” night as one Barney Stinson would say.

12 Drinking Games Around The Campfire 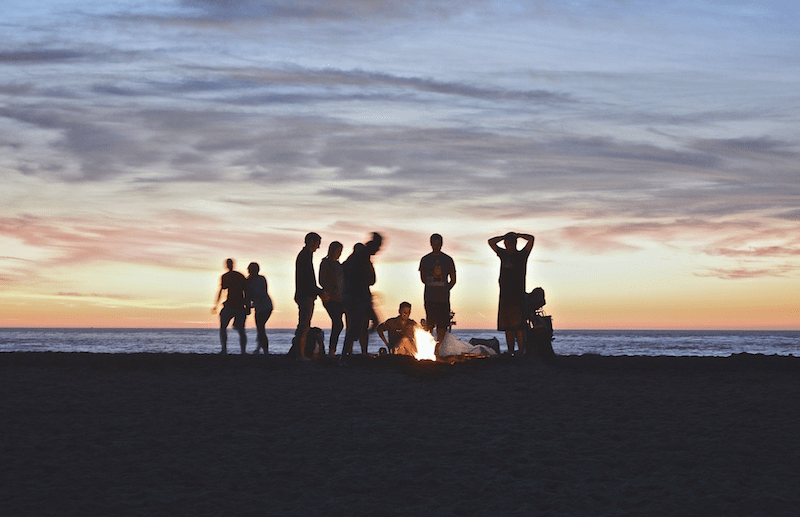 Let’s talk about some fantastic ideas for campfire drinking games.

Never Have I Ever

The trouble with a game of truth or dare is that it can all go for a select few since you are most likely to spin the bottle to stop at somewhat similar ends. One can make a bottle stop at a specific direction at about 6 out of 10. So, why not spread the fun to everyone around the fireside?

It’s a great way to share fun, embarrassing, or even serious life experiences with a group, and knowing that you are not alone in a life event or lack thereof leaves a satisfying taste at the end of this game. It is also fun to twist the rules a bit, where you can agree ahead of time whether to drink at having done it or when you have not.

Got a hard secret to tell? Why not get everyone to piece it all together, or get drunk trying? It’s funny how creative the questions can get when they are more loaded.

The game works by the player telling someone something that others would have to guess. They would have to ask yes or no questions that would match the said secret. Each wrong item leads to a shot for the asker, and a correct one leads to drinking for the player.

This game can draw out the wacky and fun side of each player. You’d need lots of props, so it’s a game you may need to plan ahead of time.

The way it works is that one player sits and closes their eyes until it is game time. They would have to fill their mouths with water until their cheeks pop. Another player would have to make the first one laugh with any means possible for a limited time. The loser of the set has to drink.

The game gets so much easier as time goes by since people tend to giggle more when they drink. You can be more creative by incorporating shadow play and effects thanks to the flicker of the campfire.

Interesting Read: How to Get Campfire Smell Out of Clothes?

It is a little like the first one where the variation you can play with this game is instead of making someone laugh; you make them scream or act surprised. A whimper will do, as you try to jump-scare the opposing player, taking advantage of the night’s creepy atmosphere.

If your campfire is located somewhere with a lot of sand, this game can make you use a large canvas and unlimited drawing space. It’s a team effort, and it can be fascinating if you have actual artists in the group. Of course, you don’t need to have talent in the arts to play this game.

If you’ve never played Pictionary before, then you need to know this is a whole lot like charades but with a canvas. You pretty much have to draw for a limited amount of time while your team tries to guess what your masterpiece is. The sand, the wind, and the campfire’s shadows breathe new life (and confusion) to this game.

In this game, one player taps someone on the shoulder while everyone’s eyes are closed. The tapped player becomes the “assassin” whose goal is to wink at people without being caught by the other players. If you get winked at successfully, you drink, and you are out for the round.

If the assassin gets caught, he would have to take a shot and leave the round. This move carries a risk because if the accuser makes a mistake, they would have to drink and drop out of the game.

This game takes advantage of the illusion of the night, and the campfire’s flicking lights. With moving shadows, it is easy to jump and assume things, making it even trickier to play.

When you think of the campfire, you usually think about people singing or dancing to some music. Most of the time, people would bring at least one instrument for the trip. These days, you can substitute a device with a weatherproof Bluetooth speaker and a phone full of songs.

It is a game where you play a song, preferably instrumental if you are using a speaker, people would have to guess the song in the air. It can be trickier with actual instruments since you can mix it up and make it sound vague while remaining familiar to the original tune. Wrong guesses make you drink, and the right answer leaves the artist with a shot.

These days, you can play this as a variation of the previous game where instead of the actual song, you guess the movie or tv show which the song is associated with. It can test your knowledge of media, and a great way to find something familiar with each other.

It isn’t limited to the songs either. You can describe a show with its actors, a phrase unique to the show, or a scene that it is famous for. The burden of difficulty lies in the person giving clues, so make it harder for others, otherwise you will get drunk fast.

One other thing that you might have lying around on a trip to the campfire is a pack of cards. You can have fun playing poker while telling stories, but why not make it more enjoyable?

Instead of having a lot of cards on your hand, you get just one to make it quick, fun, and challenging. For two players, you can take turns guessing if the card in your opponent’s hand is higher or lower than yours. Guess right, and you can make the other side drink.

If you have a larger group, you can turn this into a team game with representatives playing each round. Each person still gets to have one card, but during the preparation period, the team can arrange the representatives’ hands with the cards they have. The representatives then take the time to outwit the other side to guessing the wrong value.

There’s no limit to the number of cards you play in your hand. You can have a ten stack of 2’s or maybe just one 10. After each round, the losing team has to take a shot.

Another game you can use your cards for is assigning consequences to each card type. You can have a cheat sheet with a list of cards and what you have to do if you end up that card. Luck and creativity with the rules make this game stand out in every session.

You can assign one card with a shot, or maybe the shots. You could set up a card that gives them the power to make someone else drink. Additionally, you can set up other actions to penalize them with a drink if they fail to do it.

The goal of the game is to go through the alphabet and say words starting with the following letter. You start with A for apple, b for a boat, and so on. The catch is you have to say it quickly and right after each other, or you lose the round.

It may seem a little childish while you are sober, but it can be challenging while inebriated. You can set various rules and themes for yourselves to limit the type of words usable and make it even more difficult.

Instead of going alphabetically, you can raise the bar by making the next player start with the ending letter of your last word. You can say wood, and then the next player says door, and the next one says ranch.

If you are camping somewhere a little scenic, you can make it a game of pointing out the wonders of the world around you. This game is better played if you are in a bright place or if your campfire drinking session is in the morning or the afternoon.

The game is harder for the player to issue the challenge. Since the choices of the answer are limited to the surrounding area, you have to be creative in finding something that won’t be guessed easily. They get it right, and the issuer drinks.

Drinking games don’t have to be complicated. After all, the goal is to have fun, be inebriated, and enjoy others’ company while enjoying the great outdoors. There are loads of ways to get each other to pass the shot around, and it can be a great way to get to know each other more. Just be careful not to wake up the next day completely hungover. Make sure to rehydrate a lot when you play. 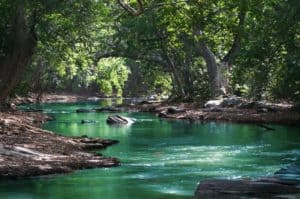 How to Test Spring Water for Drinking? 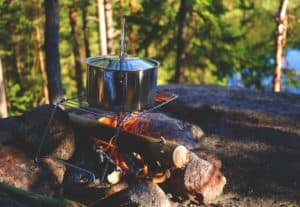 How to Get Campfire Smell Out of Clothes? 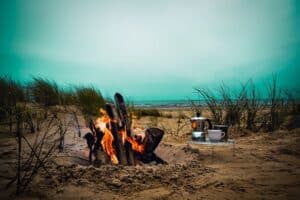 How to Make Percolator Coffee on a Campfire 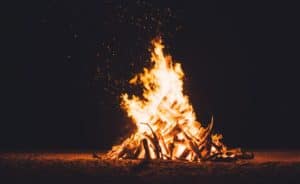 How Hot Does a Campfire Get? 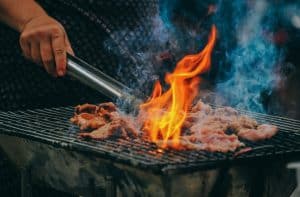