Human beings are known to be a generation of hunters for a long time. The hunting methods have undergone big changes with time, to incorporate new techniques and the use of different tools for hunting.

Hunting with dogs has been one of the earliest and simplest forms of hunting. Dogs have been used by hunters to easily spot the animals being hunted and, therefore, making the hunting exercise easy, fun, and successful.

Today, it is common to see people hunting deer with dogs. How do they do it? Is it safe and ethical?

This article is going to look into this matter in detail.

How to Hunt Deer with Dogs? 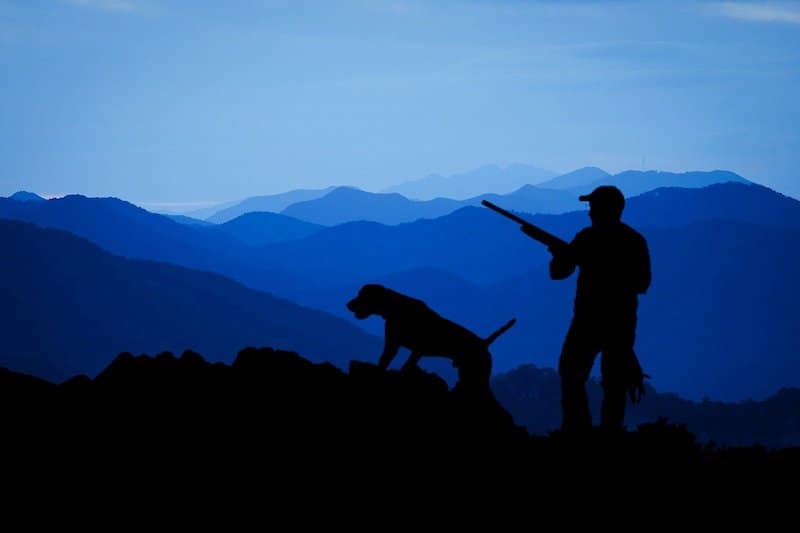 To start with, a hunter will need at least three dogs to embark on his hunting expedition.

The main purpose of the dogs is to chase deer to a certain point where hunters will be waiting and who will then have the chance to shoot the animal.

There are two ways in which the hunters might make use of the dog to hunt for the deer.

The methods to be used will largely be influenced by the dogs’ training. The first method involves identifying fresh tracks.

The hunters will then follow these tracks with their dogs helping them to locate the deer being hunted.

The second method involves leaving the dogs to wander in the field on their own and find the deer themselves.

The hunters will use GPS collars to monitor the dogs’ movements. Radio calls will be used by the hunters to communicate.

Through monitoring the dogs’ and constant communication among the hunters, they will be able to know where to stay to get a shot of deer.

Most of the hunting takes place in bushy or swampy places. It would be very difficult to spot the whitetails themselves. The hunters will stay in a secluded location where the animal can run into.

Here, they can get a good shot at the animal when it appears. The dogs are then sent into the bushes to hunt and chase the deer to where the hunters are.

Pros of Hunting with Dogs

There are many benefits associated with hunting with dogs.

Below are some of the benefits:

Below are some of them:

The best hunting experience will only be achieved when both the hunter and the dog have good hunting training. Deer are very good at hiding. Hunters should ensure to train their dogs on how to hunt for deer.

Hunters should go for dog brands that are well suited for hunting. A dog with a strong sense of smell will be the best for this case and would guarantee more success in hunting.

However, dogs that smell always tend to follow the smell. Proper training should be given to such a dog so that it can also follow the hunter’s commands; and not just the smell.

The hunter should find out if the laws permit hunting with the help of dogs. In as much as it would be all fun and adventure, hunters should know that many states across the US have illegalized hunting with dogs.

After all, it doesn’t make any sense to have a day of fun and adventures and end up paying large sums of money as a fine for breaking the law. Before going for that hunting expedition with your dog, find out if it’s allowed by law.

Additionally, a dog should be fitted with a GPS collar to locate it when it goes far as well as an electric collar to enable it to get the hunter’s commands even when the two are a distance apart.

Hunters should also know that hunting is a sport and they should not punish their dogs if the activity is not successful. In any case, they should have as much fun with the dog while in the woods.

Also, don’t forget to have the best rifle scope. You may have a powerful rifle but without a good scope, you can never achieve the expected result.

How to Train a Dog to Hunt Deer? 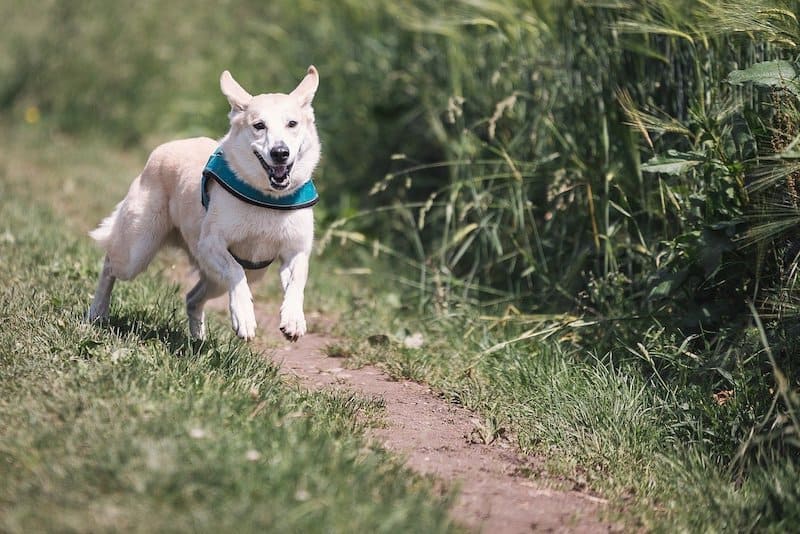 As this article has stated categorically, any hunting activity will bear more results if the dog has proper training. This poses the question; how should you train a dog to hunt for deer.

To start with, the dog has to have the ability to understand and follow commands coming from its owner. This can be achieved easily by starting with simple commands like ‘sit’ and ‘run’ as you proceed to more complicated commands. In the early days, you can use high-value reward treats like small pieces of beef jerky for responsiveness.

Hunting will involve going to the woods frequently. Due to this, you better let your dog acquaint itself with nature at an early age.

From the moment it is young, make a habit of taking your dog for a walk in the woods. This should also include making the dog run into and out of the bushes in the woods. This familiarity with nature will play a big role in helping you hunt deer.

Another important thing is to train the dog to identify a deer and differentiate it from what is not a deer. This could be challenging as the training may force you to use decoys and the dog will play with them.

Later on, when in actual hunting, the dog could instead go for the decoy. Through training, the dog should know the difference between a deer and whatever thing that looks like a deer. This is crucial for hunting success.

Lastly, the dog needs to be trained to relax close to the hunter when not hunting. The above simple training should be able to guarantee greater success in deer hunting.

It would be devastating if your hunting expedition leaves your dog wounded or maybe something bad happens. When hunting deer, you should take certain precautions to ensure your dog is safe. Below are some of the safety measures you can adopt

-You should know the hunting season in your area and avoid going hunting when it is not the deer hunting season. Going against this will be putting your dog at risk.

-You should not just go hunting everywhere and anywhere. Only take your dog for deer hunting only where hunting is allowed.

You should ensure that your dog is always on a leash. Doing this will keep your dog safe as you will have full control over where it can go or not go to

-Put a brightly colored vest on your dog and attach a bell to its neck. This would help locate the dog easily when lost. You should also consider wearing brightly-colored clothes.

-Don’t encourage your dog to chase around any other wild animals. You should limit the dog’s movements especially away from you.

-If you are taking the dog deer hunting for the first time, gunshots may scare it away. Ensure the dog is leashed to prevent it from running away.

-Always ensure to be with your dog everywhere you go. Don’t leave it unattended.

What makes the best dog breed for deer hunting? Let us look at some of them

With its origin in Germany, this is one of the best breeds for deer hunting. It is balanced and has a noble appearance.

These traits enable the dog to endure harsh environments, as well as have the necessary strength and speed that are needed in deer hunting

The breed is also affectionate and cooperative. It has great strength as well as a high level of intelligence and can, therefore, be trained fast. With all these traits, it can play a good role in hunting.

Bloodhound has its origin in the UK and Belgium. The unique characteristic of this breed is its smelling ability.

You don’t have to stick the scents on their nose as they can track a scent in the air. This smelling ability has made the dog useful in solving crimes as well as disasters.

Apart from its smelling ability, it is gentle and well-mannered. With proper training, this could be one of the best dogs for hunting.

As its name suggests, this breed is originally from the US. Though small in size, the breed has a strong sense of smell. It has tough skin which works well with being out there in the bushes hunting.

If you have been thinking of hunting deer with dogs, this article has shared every detail you need to know to make your hunting success.

This is right from choosing the correct breed to training the dog in hunting. It has also shared some hunting tips as well as tips to keep your dog safe.

In as much as fun and adventure should be experienced in the hunting expedition, you should also ensure you and your dog return home safe and sound, and possibly with some protein.

Remember your dog will play a crucial role in your hunting success; so you better train it well for great results. 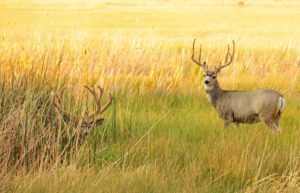 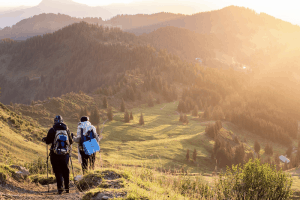 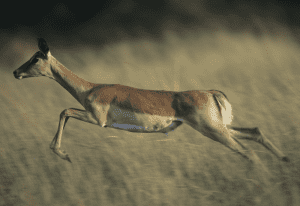 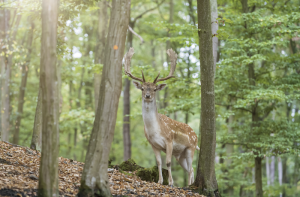 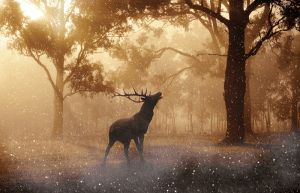